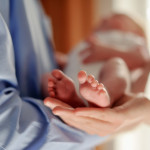 Uterus transplantation is accompanied by an intense clinical and ethical debate (see HERE). The outcome of the first case in which a child was born after a uterus transplant between mother and daughter (50 years old and 28 years old, respectively) has recently been revealed. The pregnancy was achieved after transfer of the first embryo and was uneventful up until week 34, when the patient developed cholestasis (obstruction of bile flow output) and pruritus. She subsequently underwent a caesarean section at week 35, giving birth to a healthy baby boy weighing 2335 grams. Three and a half months after the birth, she underwent a hysterectomy (removing the transplanted uterus). The child developed normally and mother and daughter do not present any special health problems 3 years after the transplant. This is the first case of uterus transplantation between mother and daughter, and the second using a donor uterus.