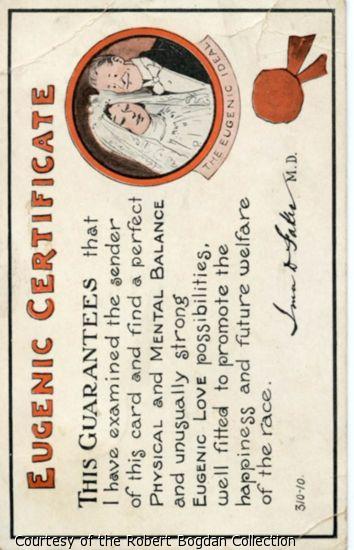 The dark history of government-sponsored eugenics before World War II has largely been forgotten, although it is well documented. A new book, Illiberal Reformers: Race, Eugenics, and American Economics in the Progressive Era (Princeton UP, 2016), by Thomas C. Leonard, is a painful reminder that some of the best minds in the United States and Britain were in favour of purging the “race” of “defectives”.

The heyday of the eugenics movement was during World War I and the 1920s. Some geneticists distanced themselves from  eugenics, but usually because it had been tainted by racism and anti-Semitism.

Eugenics was literally regarded as a religion by leading economists. In 1915 Irving Fisher, one of the greatest of the early 20th century, told a Race Betterment Conference organised by cornflakes inventor and eugenicist John Henry Kellogg, that eugenics was “the foremost plan of human redemption”. Religious opponents (notably the Catholic Church) were a shrinking minority which had also opposed Copernicus, Galileo and Darwin.

It all seemed very scientific. In The Great Gatsby, F. Scott Fitzgerald’s famous novel, the central character complains that civilization is spinning apart and that “ if we don’t look out the white race will be — will be utterly submerged. It’s all scientific stuff; it’s been proved.”

D.H. Lawrence, best known as the author of Lady Chatterley’s Lover, believed that inferior stock should be eliminated. Anticipating the horrors of Auschwitz, he wrote in 1905:

If I had my way, I would build a lethal chamber as big as the Crystal Palace, with a military band playing softly, and a Cinematograph working brightly; then I’d go out in the back streets and main streets and bring them in, all the sick, the halt, and the maimed; I would lead them gently, and they would smile me a weary thanks; and the band would softly bubble out the ‘Hallelujah Chorus’.