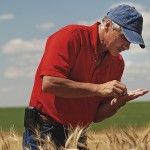 Criticises the attitude of politicians, on not recognising the value of new farming technologies

The scientific advisor HFFA Research GmbH has published a study entitled “ The economic, social and environmental value of plantbreeding in the European Union” on the role of genetic improvement in the European farming sector. The Report, which criticises the attitude of politicians, on not recognising the value of new farming technologies (agriculture genetic engineering),

concludes that genetic advances have allowed production of European crops to be increased up to 74% in the last 15 years. According to its authors, the increased production derived from genetic advances has helped to stabilise the markets, reduce price volatility and increase the world food supply. They are also responsible for increasing the European GNP by 14 billion Euros. It has also managed to slow the expansion of land destined for agriculture, preserving 19 million hectares that had been destined for farming without these technological advances. It has also prevented the emission of 3.4 million tonnes of CO2 by limiting land use change.