Robots and artificial intelligence have been staples of pop culture for decades. But I can’t recall any time when there have been quite so many prominent robot- and AI-related projects released in such a short span. A period of just under nine months has seen the release of five movies and a new TV show with high production values, cutting across genres and styles, including action sequels and comic-book movies and thoughtful indie flicks and big-studio fluff.

Here are the projects I have in mind (spoilers ahead), ordered by their U.S. release dates:

Chappie — March 6, 2015, the latest film from Neill Blomkamp, who made his name with two previous science-fiction action flicks. The film’s eponymous robot is human-shaped but metallic and electromechanical in appearance, as are the many police robots in the movie.

Ex Machina — April 10, 2015, a claustrophobic indie film from Alex Garland, featuring an artificially intelligent robot named Ava, which looks like and can passably interact with human beings. Ava, it is revealed, is the latest and most advanced in a series of robots created by a programming prodigy turned hermit CEO. 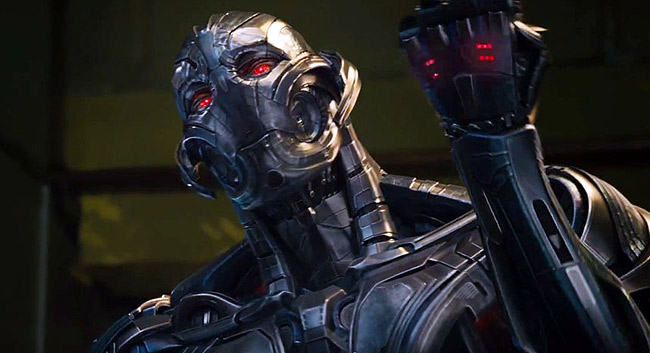 Avengers: Age of Ultron — May 1, 2015, the latest Marvel blockbuster sequel, this film features Ultron, a malevolent artificial intelligence inadvertently created by genius, billionaire, playboy philanthropist Tony Stark. Ultron inhabits several different human-shaped metallic robotic bodies over the course of the movie, and commands an army of similarly human-shaped metallic robots. We also get to see another robot, the Vision, which (in this movie incarnation) is created by merging a synthetic body that Ultron fabricated with Tony Stark’s household helpmeet J.A.R.V.I.S.