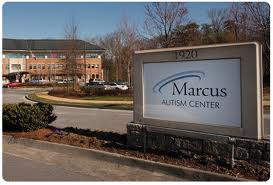 As I have written before, researchers at the Marcus Autism Center are working with eye tracking technologies to identify Autism Spectrum Disorder (ASD) in young children and infants. As Katie Strong described in this blog post, a recent article in Nature, titled “Attention to eyes is present but in decline in 2-6-month-old infants later diagnosed with autism,&rdquo;[1] presented the Marcus team&rsquo;s most recent findings related to the early identification of ASD traits. They argue that, although there are many different ‘autisms&rsquo; with many likely causal pathways, the developmental pathway to ASD is similar. This work is an effort to capture this pathway by focusing on differences in early looking patterns. In this article, they “propose that in infants later diagnosed with ASD, preferential attention to others&rsquo; eyes might be diminished from birth onwards&rdquo;(p. 427). After a brief refresher on the article&rsquo;s findings and background, I will provide a deeper discussion on the neuroethical concerns.&nbsp;

This hypothesis was built on previous research showing differences in children&rsquo;s and adults&rsquo; preferential looking behaviors during social situations. As Ms. Strong described in her blog, an earlier study found differences between where adults diagnosed with autism and adults without autism looked during socially or emotionally salient scenes from the 1966 film, “Who&rsquo;s Afraid of Virginia Woolf?&rdquo;[2] A more recent article, found that two-year-olds with a diagnosis of autism preferred to look at mouths, rather than eyes, and objects, rather than bodies.[3] From this work, the authors formulated a hypothesis that these differences were present at birth.
Read more at www.theneuroethicsblog.com